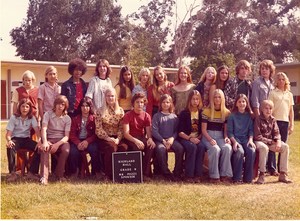 Next June it will be 10 years since we stepped off the stage at our Highland Hall graduation to embark on our next chapters. For some of us it was college, for some it was the work force, for some it was travel, but for all of us, it was taking with us the many lessons we had learned over the years and stepping out into the world as young adults. The class of 2007 is excited to come together again, to catch up on these past years and to reminisce about senior prom, handbells, our Native American trip and all the fun times we had together at Highland Hall. We are planning something for the summer of 2017, but exact details are still being determined. I will be organizing the gathering and am pushing for a camping trip as a throwback to the trips we were so fortunate to take while still at Highland Hall. Whatever we do, it'll be a blast and we can't wait!  --Jamie Aronson

Class of 1997 - Twenty Year
The Class of '97 will be celebrating our 20 year reunion at Leo Carillo state park. We spent many class camping trips at this park with our class teacher Tom Holbrook and we're all excited to meet up again to share these special memories. Looking forward to seeing everyone, and their families, in June/July 2017-exact date TBD. For more information about the reunion contact class rep Kelly Ferris at [email protected]

...and just like that, with the blink of an eye, 30 years have almost passed. This coming June 2017, it will have been 30 years since our high school graduation from Highland Hall. Three decades filled with school, jobs, moves out of the state/out of the country, relationships, marriage(s), divorce(s), kids, kids' milestones, grandkids(?), loss of loved ones...there's a lot of life to catch each other up on. We hope that those near and far will join us--class teachers, sponsors, mentors, classmates, schoolmates...so pass the word along. Please save the date: Saturday, June 17, 2017, for our Highland Hall Class of 1987, 30 Year Reunion. The reunion will be hosted on the Highland Hall campus at dusk. More information to follow.  --Annette Irving

From Steve Wilson, class rep for '77:

In the summer of 1974, Richard “Tricky Dick” Nixon was president and, after living with my mother for 15 years (my parents had divorced when I was four) and graduating junior high school, I decided to move down to Los Angeles to live with my father. I was ready for a change. In addition to the original Tommy Burgers stand being right down the street, one of the perks of moving in with my father, was that he wanted me to attend Highland Hall. Until I got my driver license, I was carpooling with Julianna Blessington (HH class of ’76), the daughter of a friend of my father’s. Robyn Ashforth was another member of that carpool. To this day, whenever I smell rose oil, I think of Robyn!

Over the next three years, I made many friends. I also made many memories. From Mrs. Schlie scolding me for raising my arm up to check my watch in the middle of her lecture to working on the year book committee and shooting photographs to singing with the choir and madrigals to playing soccer on the field (“Hey Swilson (later shortened to Swil)…pass it over here,” Chris Ayres would yell) to playing Tully Bascom in The Mouse that Roared under the direction of John Howard to Surveying with Mr. Betteridge to Drivers Ed double sessions with Harry Schoffstall on Saturdays, where the three of us got to drive not one…but TWO hours down the coast and back to Vilma Palma teaching us about drawing, perfectly round “Seerkuls.” Ahh…there are many, many more…and I plead the 5th for any class trip stories on the grounds that they may incriminate me!
Thanks to being the class alumni rep and Facebook, I have managed to keep up with many of my classmates. It certainly helps when there are only about 20 of them! And since I used to do a lot of business travel as a software instructor, I also made an effort to actually SEE my classmates when I happened to be in town. It’s REALLY hard for me to fathom that next year it has been 40 years since we graduated! And as if I haven’t dated myself already, I’m hearing Allen Ludden in my head saying, “The password is REUNION.” We don’t have a date set yet, but it’s time to plant a seed to get my classmates thinking about a reunion at Highland Hall next year. Fortunately, many of us have never left California or have left and returned. Hopefully, maybe those who are out of state, with enough lead time and preparation, may be able to join us. Stay tuned for further details and developments. I will start sending out emails to the class to get a consensus for when we can pull this off. I’m looking forward to many handshakes and hugs with my HH brothers and sisters.