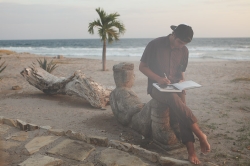 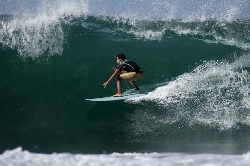 During the tenth grade, Jesse Hinkle, class of 2013, decided to ride the wave of his booming surfing career and devote his time and attention to it full time.
With offers of sponsorships and invitations to surfing competitions around the globe, Jesse left Highland Hall in the summer of 2011 to pursue a professional surfing career. Since then, he has traveled to Australia, Nicaragua and throughout California. Jesse home schooled during this time and graduated with a 3.8 GPA after completing 11th and 12th grade in one year.
Jesse is a member of Malibu Surf Association and represents the team internationally. At their largest international contest of the year, The Malibu Classic, Jesse was ranked the number one junior noserider of all longboard surfers. He is currently gearing up for the Noosa Festival of Surfing in Noosa, Australia in March 2013.
Jesse can be seen in various surfing magazines and videos including the December 2012 issue of Foam Symmetry, an Australian longboard surfing magazine. He is currently sponsored by Bing Surfboards and Hippy Tree Clothing.  This past fall Jesse also shot a national commercial for Samsung and represented the clothing line, Victorious 22.
Jesse was introduced to the waves of Malibu as a one-year-old baby riding on the nose of his Dad's 10' Tyler longboard. He began surfing on his own in 2000 at the age of six. By 2006, he was competing in surf contests throughout Caifornia.
Art has always been an important part of Jesse's life, and he customizes many of his surfboards with his original artwork, making each board a unique work of art. Jesse credits his thirteen years at Highland Hall as an influence in his artistic work and career aspirations.
To view Jesse's website, click here.