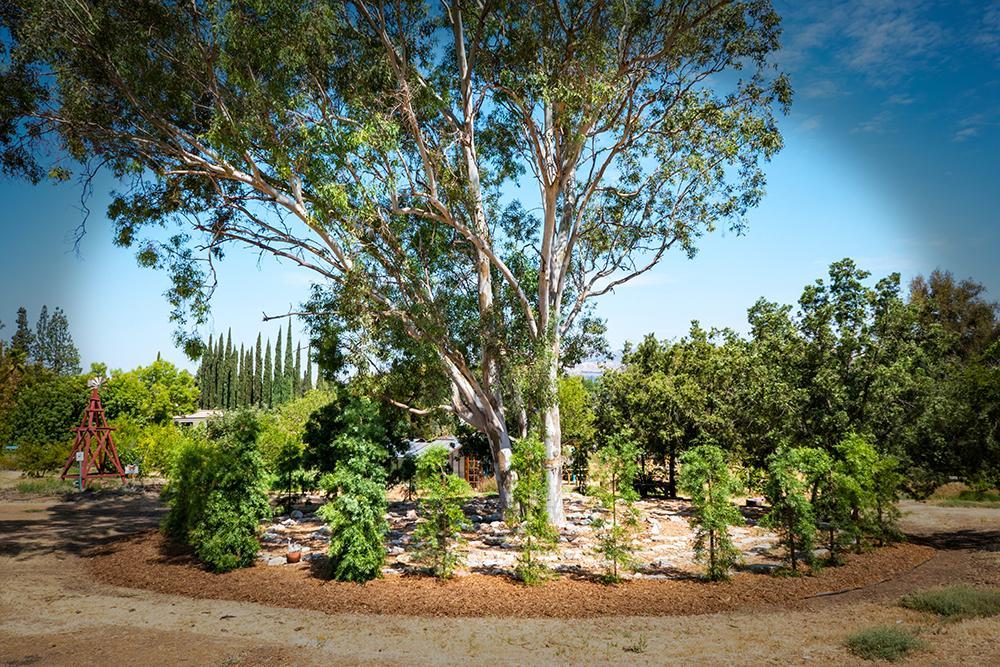 The Hilary Fix Alumni Arbor honors the students, families, and teachers who have built the legacy of Highland Hall's 11-acre campus.  When the original pioneers of Highland Hall took the bold step of purchasing our hillside of vacant land in 1961 there were only three trees on the property, including the eucalyptus at the center of the new Alumni Arbor.  Over the years, Highland Hall families planted trees throughout our campus to provide our students with an opportunity to stretch their imaginations and enjoy the comradery of friends in the shade from their branches. Today we all get to bask in the beauty of that forethought, and in turn have the opportunity to plant legacies for students and families of the future.

The arbor is named in honor of Hilary Fix, a member of the Class of 2008.  Hilary Fix brought joy, light, and inspiration to those around her.  The Hilary Fix Alumni Arbor invites you to take a moment to pause and reflect, and to appreciate the bounty we have inherited.

The Labyrinth at the Center

At the center of the Alumni Arbor is a rustic rendition of the labyrinth found at Chartres Cathedral in France.  That labyrinth was built during a time of fervor inspired by the crusades and a widely desired longing for a path to transformation of the self and the world.  It is not a maze – a puzzle that requires analysis to be solved, meaning that it might not be solved.  It is a labyrinth – a path with one way in that is also the way out.  It is a metaphor for life’s journey, requiring the walkers to learn from the ins and outs, ups and downs of the path. The only puzzle is to whether to choose to walk the path or not. Those who have the will to walk it bring to the world a deeper knowledge of who they are and what they can bring to their community.

At the entrance of the arbor is a podocarpus tree dedicated by Monica and David Fishman.  Planted in honor of the Fishman, Morrisey, Harris & Behzadi families, it recognizes family members who are Highland Hall alumni from 1982 through 2010.  The entrance is also marked by slate paving stones inscribed in honor of the Classes of 1971, 1977, 1992, 1999, 2008, and 2010.  Other stones are marked in honor of Jonathan White, class of 1973, who perished in the 1988 PanAm crash over Lockerbie, Scotland, and in honor of Rosa & Paul Hodkinson, and in honor of the Seeley W. Mudd Foundation.  Toward the rear is a custom cast concrete bench donated by Chris Albrecht as a gift from Kate and Tess Albrecht.  The bench was designed and cast by alumni Seth Ernsdorf, Class of 1988.

At the Annual Gala in March 2019, which launched Highland Hall's celebration of 100 years of Waldorf education, stones set into the labyrinth pathway were dedicated to each of the founding faculty members of Highland Hall, as well as to the L.A. Anthroposophical Society in recognition for their pioneering work creating Highland Hall.  Numerous other stones are dedicated in honor of family members and other Highland Hall faculty.

Add your honoree to the Arbor